Well, we had a stormy transit between Seward and Dutch Harbor, hounded by a classic winter Gulf of Alaska storm. The Sikuliaq rides like an icebreaker. That is to say her hull is designed to ride up on ice in order to break it, rather than being designed to provide the most stable ride in open waters. There are anti-roll tanks on board, and at times we could feel them working to counter-balance the swell. However, at other times it seemed that they got a bit out of sync and the ship would take a much larger roll than expected. Typing on the computer is a bit of an adventure when your chair is sliding back and forth. It wasn’t 100% work, however: I did find a few moments to play a few tunes and sing a few songs over the course of these last few days. 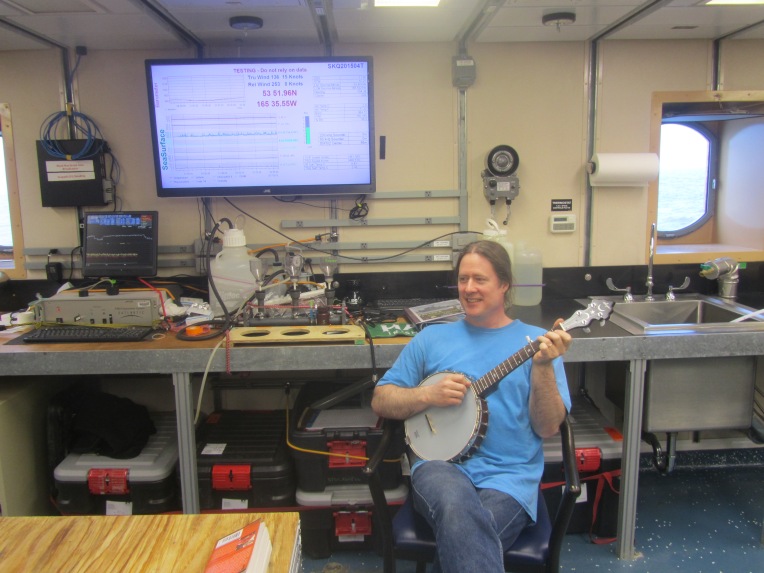 We skirted along the southern shore of the Kenai Peninsula, crossed lower Cook Inlet, and then headed down Shelikof Strait. Staying close to shore has its advantages and disadvantages. With the land close by, the fetch is small and waves not too large but the wind coming right off the land was cold enough to turn sea spray into ice on the ship’s superstructure. Icing can extremely dangerous to boats as enough ice will cause a vessel to become top-heavy and unstable. One of the features of the Sikuliaq is electric elements below some of the decks, which can be used to help keep the decks clear of ice. The old-fashioned approach to ice-clearing with mallets, bats, and shovels was also employed up on the bow.

In Dutch Harbor, many planes were delayed or cancelled due to the storm and we also arrived a bit later than planned. However, the weather cleared and new members of the crew and science party were able to make it in for the real start of the Ice Trials cruise. Before heading back to Fairbanks, I visited the Unalaska School along with UAF biological oceanographer Dean Stockwell and UAF MAP agent Melissa Good. We talked to the 5th and 6th grade classes about the Sikuliaq, the types of science that we do, and the different career paths that one can follow to work aboard a research vessel.