Recently we sat down with Andres Lopez, UAMN Curator of Fishes and guest curator for the exhibition, Arctic Odyssey. We asked him some questions about how he came to work on the exhibit, the differences between scientific research and exhibitions, and his expectations for the project. 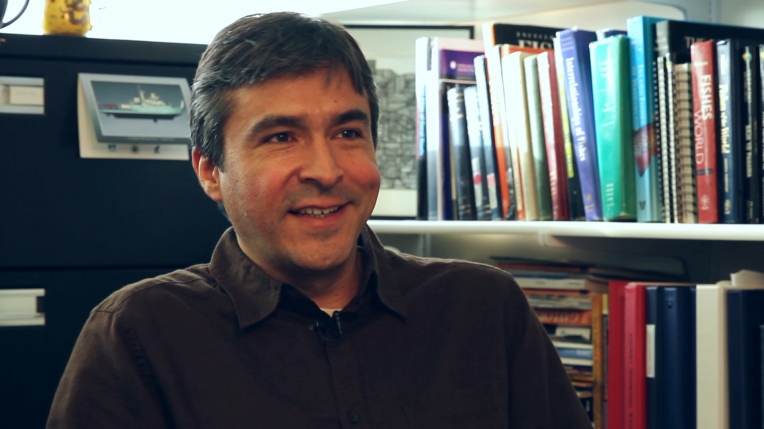 To start off, how’d you come to Fairbanks?
“I am originally from Colombia but I have been in the U.S. for many, many years, since I started college, and through grad school. My undergraduate degree is a B.S. in biology, and I followed that with a master’s in fisheries and after that a PhD in ecology and evolutionary biology. It’s a mixture of lots of biologies but also always revolving around fish and aquatic systems.
“My training, my master’s degree, my post docs were all related to museum collections. I was at the University of Washington fish collection. I worked at the Field Museum fish collection, and at the Florida Museum of Natural History fish collection. And while I was at Florida a position to serve as curator of the fish collection in the University of Alaska opened up so I came for that.”

Why did you sign up for this great task of being guest curator for Arctic Odyssey?
“I think it’s a great opportunity to let everybody know about the kind of work that goes on at the university, the museum, and worldwide. In general [scientists] write very specialized reports on specialized topics for a very well defined audience. Working on the exhibit is a great opportunity to reach a much broader audience than we’re used to reaching. An opportunity to tell the public that doesn’t read specialized magazines on research, what takes place in research labs, and what kinds of questions are being asked and answered.”

So it’s more about the general presentation of science rather than your own research?
“Exactly, it’s about being able to convey to everyone that is interested in what we do, how it works, what it is that we do, and why it has relevance to a number of questions. Not just specific questions of the science — how oceans work, how fishes work — but also how those things relate to general societal issues, problems, concerns. Just being able to expand the reach of what we do beyond the technical to the social.”

What has come out of the planning process that you didn’t expect?
“One of the things that I didn’t expect in the planning process is working with so many different goals in mind and so many different things that we need to accomplish, realizing that you need to downscale your ambitions because you can easily get in trouble shooting for the moon and trying to do everything within one exhibit. You really have to focus your ideas and find the scope of the exhibit early on so that you can get a really thorough professional-looking exhibit at the end. Otherwise you run the risk of chasing a hundred different leads and not reaching the end of any of them.”

You’re involved in lots of projects that take months and years and even decades to do the research you want to do on a particular area or species. So working on a project that doesn’t necessarily take so long to get an idea and hone it down, what’s the experience been like for you?
“It’s been a lot of fun, I’ve learned a lot of things. The way an exhibit project develops is different from the way I’m used to developing projects. I’m familiar with developing a project based on a standard set of questions. Developing an exhibit project is much different from that. It’s much more open-ended, fluid.”

Organic.
“Yeah, organic would be a good word, because there is much more creativity involved in coming up with things that will not only be technically accurate but will also be interesting. So that whole component of identifying things that will appeal to a broad audience, that actually connect well with the topics of the exhibit has been very enlightening in project development.
“It also involves a much larger team. With a research project, generally you have a smaller team that has focused expertise, and here you have a big team that spans everything from public outreach to production to the scientists that we’re interviewing and that will be providing content for the exhibit. So it’s interesting from that perspective, too, having a broad range of expertise come together.”

Given that lots of people are on the team, obviously there are many different creative ideas that are sometimes in conflict with each other. So as the guest curator you’ve got to be the person to at some point say ‘this is the direction things need to go, this is the scope of the exhibit, and these ideas are secondary to these other ones.
“And that’s a challenge, because obviously from my background I would tend to err on the side of making everything very technical and have a lot of information on complex ideas that may not really lend themselves to be deployed or shown in an exhibit.
“So another interesting aspect is realizing that there’s a huge difference in the way you convey technical ideas and the way you convey appealing ideas and general ideas about a field. While in oceanography there’s millions of open questions and very difficult questions that remain to be answered, for the exhibit we have to focus on things that are fairly well understood and give the visitor a glimpse of what’s not understood without overwhelming them with too much information that you really need to have a lot of prior experience to absorb.”

Given that the exhibit’s going to show you how the Sikuliaq works, in terms of the water and the ocean, there are a lot of cool, interesting things that people don’t think about. Could you touch on what you thought you knew about the water?
“Oceans are familiar. There’s a lot of documentaries on oceans. People visit the ocean with some frequency. But in reality there’s a huge proportion of the ocean that we can’t get to and study up close without some specialized resources to be able to access them.
“One of the things that we’ve learned in developing this exhibit is how vessels like the Sikuliaq allow researchers to get to places that are hard to investigate. And not just physically get to that location but also deploy instruments that allow them to get an idea of the conditions and the characteristics of the ocean at those locations.
“These are ecosystems that are inaccessible by definition, they’re out there in the middle of the ocean at great depths, but they’re also very interesting from the perspective of how they integrate with water columns ecosystems, with terrestrial ecosystems over the long term, how they are involved with the cycling of key elements that maintain ecosystems throughout the planet.
“So learning and working on the exhibit has given me idea of how these things relate to broader questions of how life works on the planet.”